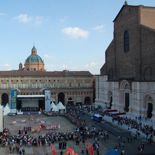 Unexpected Environmentalism — Rome as a City of Rebuilding and Reuse 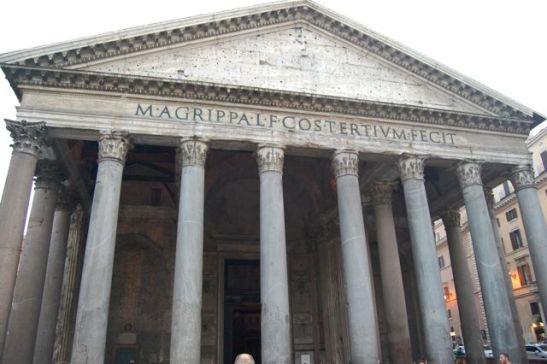 Rome’s constant transformation and re-use make it an unlikely contender for one of Europe’s great sustainable cities. Above: the Pantheon.

ROME, Italy — Architect and urban environmentalist Tom Rankin admits that Rome is not on most people’s radar as one of Europe’s greenest cities. The traffic is gridlock, the trash bins overflow, and the TV antennas leave little space for roof-top solar panels.

But if famed sustainable architect Carl Elefante was right when he said, “The greenest building is one that is already built,” there is a strong case to be made that Rome is one of the world’s great sustainable cities, Rankin explained at the University of Notre Dame’s Rome campus last month. To walk the streets of Rome is to unintentionally immerse onseself in thousands of years’ worth of resources being discarded by one society and repurposed or re-used by another.

One famous example is the Pantheon. Built in about 126 A.D. by the Emperor Hadrian as a Roman Temple, in 609 A.D. it was given to the Catholic Church and dedicated to the virgin Mary and Christian martyrs. Beginning in the Renaissance the Pantheon was decorated with artwork and used as a tomb. Upon the death of Victor Emanuel II — the first king of the unified Italy — Rome already had a tomb worthy of the “Padre della Patria”: the Pantheon.

While the Pantheon is an obvious example of re-use, residents and tourists alike probably pass countless others without even realizing what they are seeing. For example, after the collapse of the Roman Empire, aqueducts were turned into monasteries, and churches incorporated recycled columns and other previously used ornamentation into their designs. 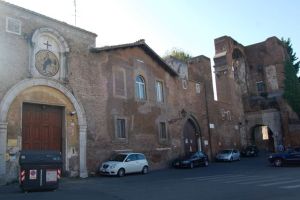 Left: A Roman aqueduct that was    transformed into a monastery.

Elsewhere, a local nonprofit called Tevereterno is reclaiming the travertine embankment along the Tiber River and using it as a canvas to tell the story of the city. The organization develops site-specific artworks called “friezes” by selectively erasing dirt that has accumulated on the enbankment.

The group’s inaugural event in 2005 was a series of 12 grand she-wolf shadows, designed by artist Kristin Jones, that were unveiled during an evening procession drawing more than 4,000 Romans. The wolf is an important symbol in the history of Rome as legend has it that the city’s founders, Romulus and Remus, were condemned to die in the Tiber River but were rescued and suckled by a wolf. A 100-person choir was on hand to help christen the newly revitalized space “Piazza Tevere.”

Right: one of Kristin Jones’ she-wolves created by selectively washing away grime on the banks of the Tiber. Photo by Mimmo Capone, courtesy of Tevereterno press kit.

This spring, South African artist William Kentridge will debut his new work “Triumphs and Laments,” a frieze stretching 550 meters (more than a quarter of a mile) along the banks of the Tiber. It will depict “dominant tensions in the history of the Eternal City,” including Rome’s “greatest victories and defeats from mythological times to present.” The frieze will incorporate more than 90 figures, each up to 9 meters (30 feet) high, forming a procession between Ponte Sisto and Ponte Mazzini.

Rankin argues that water is one of the major themes of Rome. On his blog, Sustainable Rome, he explains that the first monument of Rome was not a temple, palace, or defensive wall: it was a sewer pipe called the Cloaca Maxima. The drain was constructed in the 6th Century B.C.E. to channel storm water from low-lying wetlands — and waste from the city — into the Tiber River. It was the Cloaca that drained the swampy area where the Roman Forum now stands, allowing it to be used as a civic center.

Thus by seeking to restore the historical bond between the city and the river, Tevereterno is really aiming to bring the history of Rome full circle. If the group is successful, the city’s most recent public monument will directly parallel its first.

Just as Cloaca Maxima harnessed the Tiber in a way that made it a cornerstone of civic public life, the Piazza Tevere project uses the river as a cornerstone of cultural public life. It is the ultimate act of renewal and re-use, of capitalizing on a public commodity that has existed for millenia.

Ultimately, modern Romans who adapt existing resources to meet their evolving needs are following in the tradition of their ancient predecessors, who also understood the importance of working with what they already had.

Roman civil engineer Vitruvius explained as much in his 10-volume guide for building projects — called, fittingly, De Architetura, or On Architecture — in approximately 15 B.C.E.

“If our designs for private houses are to be correct, we must at the outset take note of the countries and climates in which they are built,” he wrote. “One style of house seems appropriate to build in Egypt, another in Spain, a different kind in Pontus, one still different in Rome, and so on with lands and countries of other characteristics.”

Two thousand years later, Romans are still taking these lessons to heart, making their city an unlikely contender as one of Europe’s great sustainable cities.