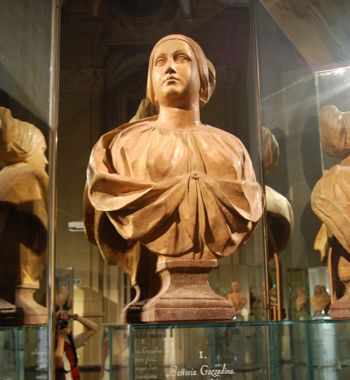 Above: A bust of Gozzadini is displayed in the Museo della Storia di Bologna (Museum of the History of Bologna), where it sits alongside busts of other prominent Bolognese women artists and intellectuals from the 13th to 17th centuries.

BOLOGNA, Italy — The stories surrounding Bettisia Gozzadini, widely believed to be the first woman in history to hold a university teaching position, are legion: She was so determined to attend university that she studied law dressed as a man. She was so beautiful that after finishing her studies she had to lecture behind a curtain so as not to distract her students. And her oratory skills were so brilliant that her lectures had to be moved to the public square to facilitate the swell of listeners.

But how much of this is true, and how much of it was added later to enhance the legend of Gozzadini, a woman who really was brilliant according to most accounts, and who, further enhancing her mythic status, died in a tragic accident when her house collapsed into a river in 1261?

Gozzadini was born to a wealthy Bolognese family in 1209. Historical accounts agree that she attended the University of Bologna’s law faculty dressed in men’s clothes, although it’s not clear if this was by choice or social mandate. After she finished her degree in 1237, earning the highest marks possible, Gozzadini taught for two years in her home before being invited to lecture at the university, according to the Museum of the History of Bologna. The Museum displays a terracotta bust of Goazzadini as part of a series of twelve Donne Illustri Bolognesi, or Illustrious Bolognese Women, active in academics and the arts from the 1200s to the 1600s. She initially turned down the teaching offer but later agreed, making her the first (known) woman in history to lecture at a university. She reportedly lectured from behind a curtain so as not to distract her students; some say it was her staggering beauty that distracted them, while others suggest it was merely the site of a woman heading a university lecture hall in the 1200s.

Gozzadini’s bust at the Museum of the History of Bologna was sculpted by Casa Fibbia sometime beteween 1680 and 1690. An inscription on its base reads: “Loving daughter, in both rights highly eminent/ Public laws explained and in Bishop’s funeral prayed. Flourished 1242. Died 1261.*” By 1242, Gozzadini’s skills as an orator were widely celebrated, according to the City of Bologna. According to some accounts, she had outgrown her studium at the university and was giving lectures in public squares to accommodate the crowds that gathered to hear her speak. When Enrico della Fratta, Bishop of Bologna, died that year, Gozzadini was given the honor of providing the funeral oration.

Information is scarce regarding the next 19 years of Gozzadini’s life. It’s not clear whether she had a family or how long she continued to teach. In 1261, the River Idice flooded, causing Gozzadini’s house on the river banks to collapse. Gozzadini was killed in the accident, and “all of Bologna was in mourning,” according to the Museum of the History of Bologna. University lessons were suspended for an entire day to honor her.

Gozzadini’s story is fascinating on several levels. First, there is the obvious excitement that comes with discovering the “first” or the “best” of anything — especially when, as in this case, the “first” came earlier than might have been expected.

Another interesting theme is that Gozzadini did not have to fight her way into the academy; both as a student and later as a professor, the academy courted her, not vice versa. According to reports, Gozzadini showed such intellectual promise from such an early age that scholars from the university approached her and encouraged her to earn a doctorate in law. Later, she turned down the university’s first offer to teach before finally agreeing to head her own studium. Unlike the feminist heroes of the 20th and 21st centuries, Gozzadini did not need to claw or “lean” her way into a man’s world; they practically begged her to join them.

But despite these enthusiastic entrées, history suggests that Gozzadini experienced tremendous social pressures at the university. She dressed a man during her studies and later lectured from behind a curtain so as not to distract her students. And yet she thrived under these conditions, graduating at the top of her class and becoming the most famous lecturer in one of continental Europe’s most important Medieval cities.

This raises another important point: Europe was still mired in the Middle Ages when Gozzadini rose to fame. The Medieval Inquisition was alive and well, targeting men and women – but mostly women – whose learning the church deemed heretical. How did Gozzadini avoid this ire? Did her status as a noblewoman or Bologna’s status as a center of learning somehow shield her from the investigations? Is this why she was so hesitant to join the academy? Or was she in fact an enthusiastic participant, but one upon whom her contemporaries acribed the reluctancy they would have expected of a woman?

Ultimately, little information remains regarding Gozzadini’s inner life. It’s not clear what motivated her, how she navigated this world, or what battles she did and did not have to fight. Unfortunately, as exciting as the legend is, the most fascinating parts of Gozzadini’s story are the ones we will never know.